Kolo means circle in Croatian. It reflects both the style of folk dance and the relationship of families and communities as well as their ties back to a country of origin. Full circle, right here in St. John the Baptist Catholic Church in Kansas City, KS, which was home to the older tamburitzans for more than five decades.

This organization is both new and old. Reaching back to the former Saint John Junior Tamburitzans (many of the adult members had been junior tamburitzans) and bringing back the tradition of regular family fests of music and dance. From small children to adults, young to old, all get together and dance. It is also a showplace for performers (musicians and dancers and dancer/musicians). Here you can enjoy a social night and also work into performance, playing, dancing, choreographing.

The older organization gradually thinned out in recent years (late 1990s to early 2000s). Not many from the old junior organization were interested in continuing the heritage of the tambura and Slavic culture. Parents were otherwise busy and were not focused on making sure the kids were actively learning about their heritage. The cool factor wasn't there. After 2001 there was some added pressure from society in general regarding anything which might not be seen as "American."

Most of these things seem a part of the regular ebb and flow of volunteer organizations. In the case of ethnic organizations often the next generation's curiosity revives an interest their parents may have put on the back burner. It is also helped with fresh infusions of people from the "old countries."

The current organization was started in 2007 after some of the former members attended an adult Tamburitza festival in St. Louis. Kristina Mikesic wrote that they, "... found a spark was still there. Combine that with some enthusiastic immigrants from the 1992 war in the former Yugoslavia...specifically Bosnia-Herzegovina. Once again there was life but now as adults who found that it was important to preserve their heritage and share the passion for this music that they had. We were bound and determine to make it fun and if we were having fun others would see that and hopefully come along. "

The organization is growing. The newer generation is reaching backward toward heritage and looking forward as a community. In a sense, a revival, and a renewed discovery of and appreciation for Slavic culture. Kristina Mikesic notes this is also an increased acceptance today in the U.S. for other cultures. The Slavic community itself is open to sharing and embracing those without a Slavic background.

I should note this seems true of ethnic groups in general who tend to be very open to sharing their cultures with others.

The legendary Don Lipovac is an avid supporter and a contributor when called on. Lipovac spent much of his life educating, training, playing and touring across the globe. Many members of the current group credit Lipovac with their knowledge of playing.

The director of Hrvatski Obicaj is Rick Mikesic who works with a governing board and with group members who are now writing new music for Hrvatski Obicaj. 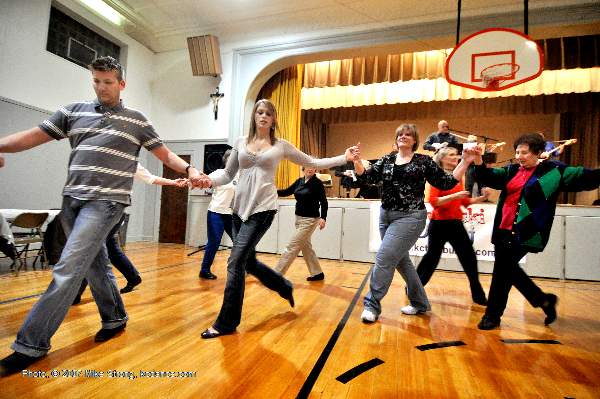 Links to other Croatian dance on this site

Just found his site. Great going. Am getting interested in jining the Sacramento kolo and the culture club thre.Is cousin Bill Vrbanic from working for my dad aat Miller Cooper still alive?Would like to know more of his and my Grandma Polje? roots and relation to my dad.And Sugar Creek croats as dad met my mom at one of those dances. He and Bill went to dances a lot.Tnx, Mike Krisman